All posts in Blog

performance as an act of intervention – part one

“… I oppose the global project and I believe in another kind of global eccentricism project that comes from within, from the bottom up, that is ‘cooked’ on the streets and that organically emerges out of it. You know, the migrations of people throughout the world; and that kind of global project is almost opposite to the one imposed by the master minds of globalization, right?”

from Lotus Blossom Speical; Metamorphosis and misidentificaiton in Madama Butterfly by David Bateman

Puccini’s opera Madame Butterfly begins with a mock marriage.  This type of

marriage supposedly belongs to Japanese tradition, at least, in the imagination of the

marries the naïve, fifteen-year-old Butterfly in a contract that binds them for nine

hundred and ninety-nine years, “but with the option, at ev’ry month, to cancel the

contract.” Both are ecstatic at the union, but for Pinkerton, it is a frivolity, while for

Butterfly, in spite of her relatives’ admonitions, it is deadly serious. The opera’s tragedy

turns on the misunderstanding between play and reality. This is indicated in the very

opening of the opera, with Pinkerton and Goro observing the mobility of the walls of the

house in which Pinkerton and Butterfly are to be husband and wife. The walls and ceiling

“come and will go, just/ as it may suit your fancy.” Pinkerton calls the house a “fairy

house, Butterfly, for Pinkerton, is a toy (“the age/ of playthings”)  to play with until he

marries “a real wife from America.” To Butterfly, who, in the logic of the opera, inhabits

only the world of play, the marriage is serious and solemn. Those who live in fairyland

experience it as “real.” Tellingly, while showing Pinkerton her treasures, she throws

used to commit suicide at the Mikado’s command some years prior.

The opera draws a frame around Butterfly, her house, and indeed, Japan itself. It

is self-aware, but it is not self-reflexive in the sense of seeing it’s imperialist

misrecognition of Asian women. It lays the error of reading at Butterfly’s feet. She can

not see who she is. Pinkerton might be callous, but because he is American (and real) and

she is Japanese (and therefore of the imagination), he cannot be expected to stay with her.

In the logic of the opera, Butterfly’s tragedy lies in her own misrecognition of both

herself and her lover.

Of course we, as good postcolonial readers think we know better. We understand

that Madama Butterfly is a racist, imperialist imagining of Asian femininity. In the

context of American imperialism in Asia, if one thinks of its military bases in the

Phillipines, or more pointedly Vietnam (which is what makes the newer rendition of the

opera, Miss Saigon, so appalling) the international political context in which the opera

circulates is racist and offensive. The right-on stance of contemporary race politics is to

read the opera as a bad Western race fantasy, and move on to produce other, better

representations. However, in recent years, as myself and others have discussed elsewhere,

Orientalist way, has shown itself to be difficult if not impossible.

slightly different strategy. He re-engages the narrative of the opera to show us something

about whiteness, masculinity, camp and queer sexuality. In so doing, he reveals that these

may in fact be the real subjects of the original opera, and not Asian femininity at all.

Puccini may have been more conscious of this than his audiences, if the framing is any

It’s been a fired up few days, our group of artists meeting, contemplating, performing, creating, here at the Rework(s) in progress incubation. So much to say, to write, to move with poetry and image, but still such unspoken spaces. Here, a few images from our Monday afternoon gathering, where Leah Decter took the piece she’s been working on with Jaimie Isaac, who couldn’t join us this time as she’s just had a baby!, entitled (official denial) trade value in progress, a project where folks are encouraged to comment upon a Stephen Harper statement denying the existence of colonialism in Canada. These statements are sewed into the fabric of several Hudson’s Bay blankets, a palimpsest of history and that which has come before us. 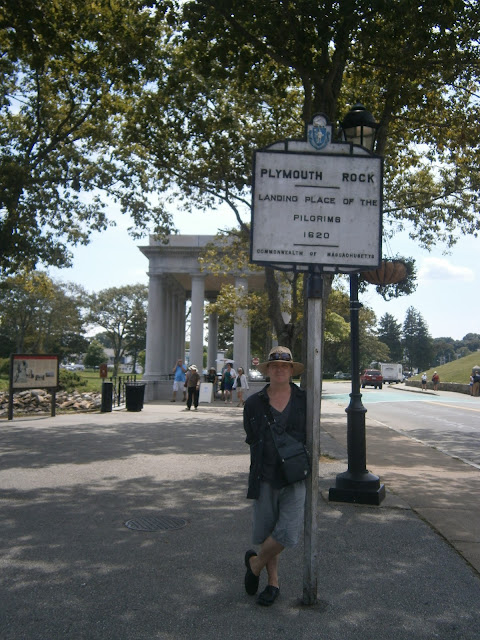 I COLLECT SNOW GLOBES FOR A CLOSE FRIEND. ON A RECENT TRIP ALONG THE NEW ENGLAND COAST I WAS HARD PUT TO FIND ANY UNDER SEVEN DOLLARS, AND I WAS ON A FIFTY DOLLAR A DAY BUDGET. IN PLYMOUTH ROCK I FOUND ONE FOR $1.79. THERE WERE PLENTY OF OTHER SOUVENIRS TO BE PURCHASED. BUT I SUPPRESSED MY INNER KITSCH CONSCIOUSNESS AND LEFT THE MORE DUBIOUS ARTIFACTS TO LIE ON THE SHELVES OF A GIFT SHOP ON THE EDGE OF CAPE COD BAY AND ONLY METERS AWAY FROM THAT FAMOUS LITTLE ROCK. AFTER LEAVING PLYMOUTH I COULDN’T GET THE LYRICS TO THE COLE PORTER SONG, ANYTHING GOES, OUT OF MY HEAD. WEEKS LATER THEY STILL COME BACK TO HAUNT ME WITHOUT WARNING – AND A STRANGE NEW COLONIALIST NARRATIVE THAT I AM SURPRISED, AND HALF-ASHAMED, THAT I NEVER NOTICED BEFORE. 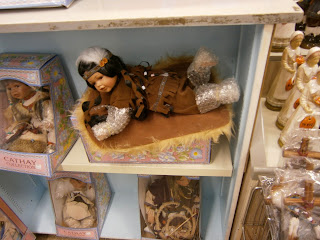 And we’ve often rewound the clock,
Since the Puritans got a shock,
When they landed on Plymouth Rock.” 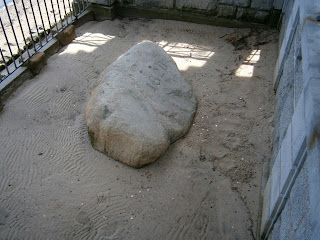 Any shock they should try to stem,
‘Stead of landing on Plymouth Rock,
Plymouth Rock would land on them.” 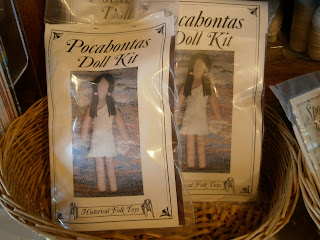 PLYMOUTH ROCK SITE (WITH ROCK INSIDE!)

“In olden days a glimpse of stocking
Was looked on as something shocking,
But now, God knows,
Anything Goes.” 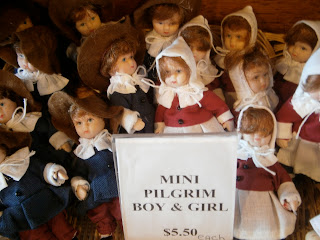 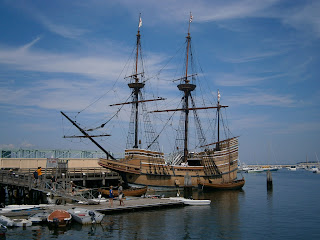 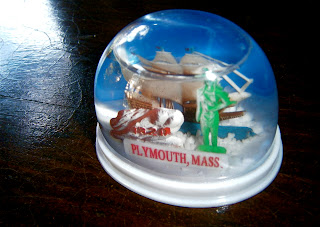 lyrics from Anything Goes by Cole Porter

History in the chapel

The first afternoon and evening of the reworks gathering, off to a stunning start. Couldn’t get by, though, without first noting how the more things change, the more, well…. This is a movie poster from a somewhat dated film (and concept) found on Queen Street in the downtown of the Soo. Saw this while wandering with David Garneau (our keynote tomorrow), Steve Loft (one of our curatorial organizers) Ayumi Goto (fresh from finishing the written component of her comps only yesterday), and Robinder Sehdev (who some of you will have seen published in Cultivating Canada).

But that is the small of it. The large is the site we’re on, and we have Don Jackson, a tireless worker and organizer here on the Algoma campus, to thank for the tour he gave our group members this afternoon. As always, he was engaged, articulate, and passionate about his work. And as always, a pleasure to have here as such a foundation. That’s him at the pulpit (or almost) regaling our crowd with some of the histories that came to shape Shingwauk. A reverse shot looks out at the street on a beautiful fall day, framed by a church entrance that has seen many histories pass through its doors, undoubtedly.

We finished off the tours and then moved to talks and performances that told further stories of the land and its people. A powerful way to start to comprehend a lot of the pasts that create our presents, formational in their intricacy, and sometimes ugly detail.

We close in a short bit with a celebration. A launch of the Reconcile This! issue of West Coast Line. We’ve had the online version up for a while but this is the first display and distribution of the hardcopy version, wonderful of design and powerful of content. This truly allows us new ways of considering those pasts and how they might develop our futures.

The flight in from toronto island, a drift of cloud and water, accented by colours outside the spectrum of normal vision as we hovered precipitously between lakes huron and superior, a blast of oranges and reds that exceeded senses.

The first arrivals from the west coast, meeting downtown to dine and connect, a leaking out of thoughts and sensations, on what we do here, and how we can possibly proceed. Not the first day, but the eve. We pause and reflect, and think of where to begin.

This video was included in the Vancouver Art Gallery’s exhibit this past summer on Indigenous Hip-Hop Culture. To me, it confronts viewers/listeners with an audiovisual collage of representations of First Nations peoples from mainstream media, thereby both critiquing those representations and inviting reflection on how First Nations peoples and cultures are being represented in mainstream media culture today.

For more music and info, visit http://rpm.fm/music. This site features a ton of up-and-coming Indigenous hip-hop artists, including these guys (http://rpm.fm/music/download-beaatz-one-last-time/), who do a fantastic job blending political, thought-provoking lyrics with hard-hitting beats and excellent flows. One of them is only 15 years old!

How do we inspire activism?

Claire at Isuma.tv (an online Inuit media community) asks an open question to viewers of her video blog: how can we get creative in using art to inspire activism and alternative thinking? She mentions several projects in Africa and elsewhere that may be of interest to followers of ReWorks. Also, Isuma.tv in general is a fantastic media resource. Feel free to explore it!

If you haven’t yet had the chance to take in CBC’s well-produced documentary series, “Eighth Fire,” I’d highly recommend watching its most recent installment, “Indigenous in the City.” With engaging host Wab Kinew facilitating, the episode takes a fascinating look at the realities of urban life, where Indigenous and non-Indigenous people are living in close proximity in greater and greater numbers. This series is tremendously exciting because it provides viewers of all cultures with a focused look at various aspects of the lives of Indigenous people in Canada. Kinew talks with elders, digital artists, scholars, and rappers, all of whom weigh in on “reconciliation” as a concept and a lived reality.

As we approach the gathering in Sault Ste Marie, thought it might be worthwhile to reflect a bit on recent activity in the field of ‘reconciliation art’. Recently, at Arnica gallery in Kamloops, Chris Bose curated an exhibition that featured four artists who were/are intersested in this topic, taking it to new levels with their media and multi-media productions.  Further info here: http://www.gallerieswest.ca/events/official-denial-the-art-of-the-apology and below, the curator’s words on the show’s concept. Watch for upcoming tours to different venues.

An exciting and invigorating day, just a fortnight before we all descend on the Soo for the reconciliation work(s) in progress symposium and incubation. We tripped the lights on this reworksinprogress.ca site at noon today (PST), promoting through facebook, twitter, email lists, and all other forms of social media that came to mind. This included ripping a qr code (that’s it on the left) that we can use for site promo — feel free to distribute to interested parties — and a series of facebook ads and commentaries that will show up to those who have expressed interest in truth/recon discourses. While we don’t anticipate growing the numbers in attendance at the symposium by very much, owing to time and distance, we do hope a significant group of folks will check in to the reworks site periodically to investigate developments. This site will grow, too, during the incubation as we try to feature not just the showcased work of attending artists, but the ongoing work(s) in progress and associated questions, problems, and concerns. To that end, if folks have any thoughts toward said development, please do let us know — a comment or note would be most valuable and quite appreciated. And onward we go.